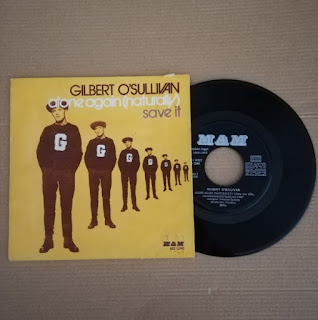 She couldn't exactly remember when she first listened to Gilbert O'Sullivan, but it was in 1971, when she was 12 years old. She and her friends listened to a radio program called The golden 50, in which the 50 most successful songs of the moment were broadcast. It was in the evening, and she listened to it every day, because at that time, she had already done her homework. When she listened to Gilbert O’Sullivan singing Alone Again for the first time, she was completely shaken. Since the songs of the musical Oliver! - her father had taken her to see the film an also bought the record for her- she had not listened to any other song that she liked so much. She liked the music, the voice, and the singer, which had nothing to do with the other singers liked by her friends (Don Mclean and Cat Stevens, mostly). He was weird and different, old-fashioned, eccentric. But for her he was absolutely sublime and she spent all her adolescence listening to him and singing his songs. Gilbert O’Sullivan filled her time and sparked her imagination by being at her side during some years that could have been difficult. But not only that: because she wanted to understand the lyrics, and did not rule out meeting him and even marrying him when she grew up (!), she convinced her parents of the absolute need to sign up for English classes. She also wanted to study piano because Gilbert played it, but her parents did not give in. "Later," they said, "You have enough with English lessons and school."

The years passed, and little by little, her fondness for Gilbert slowly vanished. He didn’t bring up new albums and when he finally did, it seemed to her that something was lost on the road. Meanwhile, other music, other myths had taken his place, and Gilbert became to her a memory of the past.

A small crisis occurred to her in 2003. At work, everything had become oppressive, she felt that she had no field to run and that no matter how much she did and proved, other colleagues got the merits. That year they installed internet at work, and the first thing she looked for was "Gilbert O'Sullivan." What would have become of him? She found his website, and discovered that in the past years he had been releasing many records. She bought them all. Some of them arrived dedicated. The teenage years come alive again and she remembered that there was one thing left: playing the piano like Gilbert. She signed up for piano lessons -at 44 years of age-, and so began one of the most glorious times of her life. She did not learn to play Gilbert's songs, but she met a great piano teacher who introduced her to classical music. It was like entering another dimension, living a parallel reality that had been hidden until then. That period of maximum learning and discovery lasted until her teacher died in 2016. That year, lights were turned out around her and the everyday life became ungrateful. Everything was difficult and she lived immersed in a great discomfort. Finally, the pandemic came, and during those dark days of strict confinement, she casually found Gilbert on Facebook, singing the old songs again for his/her fans and followers.  Suddenly she realized that the environmental uncertainty was not able to generate to her the catastrophic mood that was reigning around her. The fear had vanished, inside her everything was fine.  Who knows… maybe Gilbert O’Sullivan had appeared  in her life again to lead her along a new and happier path.  As always, Gilbert O’Sullivan was there again, naturally.